How much does a Marine get paid in boot camp?

The Defense Finance and Accounting Service (DFAS) pays Marine recruits as an E-1 with less than 4 months of service. Many will graduate boot camp as an E-2, but while training as a recruit, everyone is paid the same.

Here are the details.

Marine recruits are paid according to the Department of Defense Military Pay Chart. Recruits across all branches of service are paid the same.

Military members are paid on the 1st and the 15th of each month, unless that day falls on a weekend or holiday. In that case, they are paid the last working day, typically Friday.

Considering you’ll be training sometimes 14 hours a day, that doesn’t seem like much. But you should take into account the benefits the military offers.

Considering rent can be close to $1000 a month as a civilian, and basic healthcare and dental another $100, your pay as a Marine recruit is actually quite good.

There’s also the fact that you won’t have a chance to spend that money. Many recruits graduate boot camp with a couple thousand dollars.

That’s a decent chunk of change.

I mention that because a lot of Marines will graduate as PFCs, and a few honor graduates will become Lance Corporals straight out of boot camp!

When you’re on deployment, you may get hazard pay and basic allowance for subsistence (BAS) which increases your pay.

Married Marines get a basic allowance for housing (BAH) so that they can provide a home or apartment for their families close to base. There is also base housing that is provided for married Marines.

BAH is calculated using the cost of living near your base, and is usually around $1500 per month. You can calculate your duty station BAH using the DoD basic allowance for housing calculator.

Entitlements like BAH and BAS are non-taxable pay, but you’ll still have to pay taxes on your basic income, calculated by your home state of residence.

I know, it seems strange that the government taxes its own money, but that’s how it works.

The military also offers a Thrift Savings Plan which is basically a retirement account. I highly suggest that you put a portion of your income in there and don’t touch it! You’ll be able to roll it into a civilian retirement plan when you leave the Marine Corps.

Trust me, you won’t be thinking about saving money when you’re focusing on passing the next few hours.

My advice is to put 10% of your pay into the TSP and don’t ever touch it. You’ll hear a lot about this from your chain of command.

There are also tax professionals on base you can speak to about saving money.

You’ll setup a Pacific Marine Bank account when you go to boot camp, and your pay will be deposited twice a month in your account. After boot camp, you can use a bank of your choice. 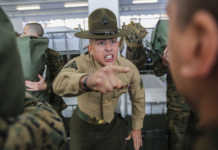 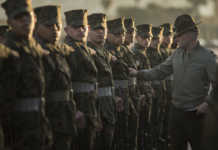